Coming for next year:
Trying to keep this as simple and less money taking as possible. Haven't thought of design yet. Probably gonna make this for Ropecon at least, if not before.

I didn't find any pictures of the outfit I'm going to do, so let's keep it as a secret for now ;D

I'm gonna do both of his outfits at some point, for sure! But I like his G-Revolution version more, so maybe I'll start with it. Although there's not much reference material of it.....

For some unknown time:

I was planning her for next winter but then I realized she only has that dress, and not jacket like I first thought :'D So maybe for some other time.

I haven't thought which outfit I'd do. Psychic uniform would be a nice challenge, but I like her casual clothes :'D

Because Vulpix is <3 I have design in mind.

Because Max is the best. And G-Revolution. I've planned this ever since I first decided to cosplay Max.

This is a BIG MAYBE. Because cosplaying real-life characters is... I dunno if it's harder but, you get it :'D And all her dresses are pretty revealing. I was thinking that one she wore when she visited King's Landing's orphanage in Season 3 episode 1.

I'm not a gamer, but Bust-A-Groove is one of those few games I have spent time with, and I always liked Shorty, because she was first character I learned to play with.

I'm trying to get my big brother to cosplay HoroHoro ;^;

I want to do at least one seifuku-cosplay, and Free! is the thing right now. Although I'm not sure if I want to do this while it is still so big thing l'D And I haven't seen that many Gous.

There is also one cosplay for group, but I'd rather not advertise it since I'm not sure if we're still keeping it as a secret :o and I 'm not even sure will we even do it.
I'm open for new ideas and advices (for example for Salima's and Elyon's wigs). And you can also help me to choose cosplays for next year!
Lähettänyt Sipsinekku klo 13:54 Ei kommentteja:

I was trying to figure out something cool to start with, but in the end I couldn't think anything...

This is a little report of my Tracon, last weekend at Tampere. I still don't have many of my cosplay, as the ones taken at the con are on Rewe's camera, and I'm waiting her to send them to me.

Saturday
Original plan was to jump to the train, but Friday a friend made a Facebook status saying that their car still had space for one or two. So of course I took that! I arrived to Otaniemi around 8 am, and we started to pack the car. Rai had lots of stuff she was taking to Cosplay flea market held at con. I first thought we have to sit with boxes on our laps, but everything fit to the tailgate after all. Only that I had Hakyryuu's staff along, and so I had to sit on the middle seat with the fur thing in my nose l'D
We arrived to con, took Rai's stuff to the flea market place, and our own stuff to cloakroom. After that Rewe and I went to see a program called Magical Education. It was just about books and how they showed magic education in them, maybe a bit boring (at least not what I except it to be). After that food, some hanging around, seeing friends and photoshooting. Then I went to see cosplay competiton with my friends. Today was World Cosplay Summit, solo competition and Miss Meter. Right people won and placed for all competition ^^ Congratulations for everyone, especially for Ilona and Heidi for winning WCS preliminaries!!
After the competition I was thinking of finding friends, for example the one whose place I was going to stay over. A problem: my phone wouldn't work! It just had a white screen when I tried to open it. Thank god I found Dino who was on her way to see our friends' program, so I tagged along (I wasn't first planning to go to see it, but as the competition ended an hour earlier :'D). There I found other people as well, and after the lecture I was able to contact others with their help.
I was also planning to go to see Tampere's symphonic wind ensamble's anime consert and "Cosplay in Nordic Countries", but as I needed to go get food for my friend in art alley and we had our photoshoot that time, I couldn't make it. And I wanted to just hang around for a while, and not just run from program to another :'D

Hakuryuu: I liked this costume a lot. It was very comfortable, if you try to forget it was hot. What I need to fix: Crown. It wouldn't stay on my head and it was too big. I needed to go to buy some hair clips when we got to con so that I could get it stay place, and it still wanted to exude. I need to widen the black collar (and maybe do those patterings? But how, painting? Ideas?). The staff broke when we got back to Espoo, so I need to fix it. And also make that yellow... thing... below the blade.. Also I need to fix those red parts, as they were just ugly. And I need to do something to the corset-thingy! It kept rolling down all the time >_<
And next time, skin coloured binds/sport bra....

Sunday
I was supposed to take Mathilda along for Sunday, but because a frustration with her wig, I left her home.
Again early wake up, as Nani's shift at con started at 10. We got ready and headed out. We arrived to Tampere-talo a bit after 10 so I decided to go see a lecture "Evolution of Digimon-anime". They went trough the each season and gave their own opinions and what they thought of characters and so on. It was nice, but next to me sat a guy who was commenting things himself and to people sitting behind him ALL THE TIME!! He was calling the lecturers "amateurs" and snorting to their comments and saying that he couldn't get anything of their presentation. And he was lying on the floor (it was so full someone had to go to floor). So. Annoying. And rude. Anyways, as the program lenghtened I couldn't listen to the end (well, I only missed part of the Savers and whole Xros Wars, which I didn't even like, though it would have been nice to hear their opinion about it.) as I needed to go to next program. It was "Cosplay Around the World" held by Elffi, one of the most succesful male cosplayers in Finland, representing us in WCS in 2011, and Calssara, a guest from Germany, and represented her coutnry in WCS in 2009 and 2011 and in European Cosplay gathering in 2012. They have both visited in many countried thanks to cosplay. I'd like to go to foreign conventions ;^; who will come with me?  They talked about how people see cosplay in Asia, America and Europe, and about international contests.
Sunday there was also an cosplay competition, now Nordic Cosplay Championships preliminaries, skit competition and Hall Cosplay. Both who got to NCC were so awesome (another one (don't remember the character's name) was my favourite of all of them, her show was so nice and costume so cute <3). Also the top trio in skit competition were all my favourites as well! It was nice to see a Vocaloid show that wasn't Magnet or some Miku jumping around the stage. And Duke Venomania's Madness is <3 Flynn Rider was awesome. Nothing else to say.
After the competition it was a drive back home. Tiredness and hunger were great.

Max: Well, Max is Max. I still love him <3 Wig is a bit itchy and both tightening hooks are broken, but other wise it's good. I should really make shoes for him. Maybe some day in future. I didn't take any pictures of him, as I hadn't added anything new. Well, the blade, tough it's Max's G-Rev blade :'D I'm gonna do that version of him some day! 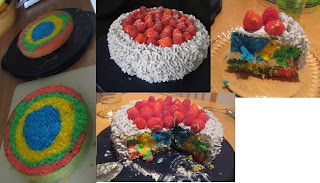 IT'S A FREAKING RAINBOW CAKE!!! \o/ I have been planning to try this for a while already, and now I finally made it :D It's yummy! Inside an orange filling.
Lähettänyt Sipsinekku klo 17:21 Ei kommentteja:

I finally decided to make myself a blog. This far I have only used DA's journal, but as you can't add pictures to your enties without Premium, I thought this would be handy. I'm probably going to write both in Finnish (mostly) and English (if my DA buddies read this as well :3).

Wow. I've been really active during last 7 days... First I made Skype last week, and now this! :'D

This blog will mostly be about cosplay, cons, anime/manga and food. So basically all that's important in my life. I'm still not that good in managing blogger, buuut I guess I will learn (hopefully...).

Currently I'm looking for a new job. My summer job ended a couple of weeks ago, and now I have only been lazying around -_- I was in a job interview today, to Hotel Siikaranta in Espoo. The place seemed very nice, and the interviewer(?) was really nice and told a lot about their buisness. And she also said she's very pleased with me, so maybe I have a chance~ Only bad thing is that the place is a bit far and not the most easiest place to get to. But what I looked, there will go busses there during whole day.

I'm also looking for an own apartment with my friend. Today we got a offer from one of the places. It's actually almost next to where my brother used to live until start of the summer :'D We're going to visit the renter or something Friday. I mean, we're not going to the apartment itself, we're going to the office of the company which rents it. The location at least would be almost perfect, as it's near the train station and also many buses go from there to around Espoo.

Tracon is also near. I have my cosplays almost ready.

Mathilda of course is ready, as I made her already two (already so long!!!??) years back. I ordered a new wig for her though, and it needs to be modified, as in cut and the antennas. Although, I've never done those bracelets of hers o_O I always forget them, as I don't use jewelry...
For Hakuryuu, I still need to finish his jacket and staff.  I'm very satisfied with his costume. Only that I'm not completely satisfied with is his crown... thingie... But I still try to fix it, it's not that bad :3

Hakuryuu must be first time I still have things to do for cosplay this near con. I was sure this would be my first "finish the cosplay night before con"- kind of things, but I got it done pretty fast. Woot!

I have also plans already for next year~ But more about them after Tracon! See you there!! o7
Lähettänyt Sipsinekku klo 23:10 Ei kommentteja:

Me, myself and I